How to Test the Quality of Powder Coatings

How to Measure Paint Thickness with a Coating Thickness Gauge

The Ambient Oxygen Ingress Rate (AOIR) method, can measure the
permeability of oxygen through films in finished packaging. The rate 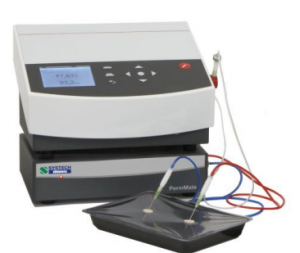 at which oxygen passes through a packaging film is a key factor for
food products packaged under a modified atmosphere designed to
exclude oxygen and inhibit the growth of microorganisms, thereby
prolonging the shelf life of the product. Most existing techniques
measure oxygen permeability of film before it has been
incorporated into the package – where the process of heating,
stretching and forming can affect the film’s properties.
“Conventionally oxygen permeability of packaging film is measured on a flat film at a defined
temperature – usually 23ºC,” says the AOIR method’s inventor, Dr Hanne Larsen, a scientist at the
Norwegian research institute Nofima. “It is an established method and is very good for comparing film A
with film B and film C, and for providing data under standard conditions. However, when a food product
is packaged the film does not remain flat and uniform – it is heated and stretched, so some parts will be
thinner than others. My idea was that it would be much more useful to measure oxygen permeability of
the finished packaging.”
Because the technique can be used on the finished article, it can carry out permeability testing under
the conditions in which the product is stored – at any temperature, rather than a single standard
temperature.
“The system allows the packaging to be optimised, for the processor to get much closer to what is
actually needed,” says Larsen. One key consequence of this is to eliminate the issue of over-specifying a
packaging material by using a thicker film than is needed. This cuts costs for the producer and reduces
waste for the consumer.
“The method also allows potential weaknesses in the package to be discovered,” Larsen says. “For
example leaks at sealing points. The process can then be modified to provide better packaging,
improving shelf life and reducing spoilage. Overall the method allows the producer to optimise, simplify
and redesign, all of which reduce costs and cut down on waste.”
The AOIR method has been incorporated into a machine called the PermMate supplied by Systech
Illinois, an expert in oxygen permeation analysis and headspace gas analysis for the food industry.
The PermMate has already shown how it can save costs and reduce waste for a bread
manufacturer. The company had a problem with ingress of oxygen into the packaging and had decided
to go for a thicker packaging film, from 180 micrometres to 240 micrometres, assuming that this would
solve the problem. They tested both sets of packaging with the PermMate and found that the
difference in oxygen ingress between the two films was so little that it would not have been worth
making the switch. The extra packaging material would have had a cost implication and led to increased
waste once the packaging was discarded by the consumer. Without the PermMate they would have
simply relied on their intuition, which in this case was shown not to address the problem.