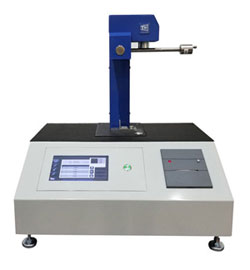 With the introduction of synthetic resins, early papermakers discovered the need to measure internal bonding strength of fibers in paper. In 1957, the first internal bond tester was developed for the paper industry for American Cyanamid to measure and improve fiber bonding strength. The Ibond tester was later commercialized by Precision Scientific for the pulp and paper industry. The current Internal Bond tester (Scott type) manufactured by TMI is based on the original design produced by Precision Scientific Co.

Although numerous mechanical improvements and safety features have been added to the TMI manufactured IBond tester such as automatic sample preparation system which includes pressing and cutting the individual specimens, calibration blocks for pendulum verification and magnetic pendulum release there are still many factors which influence test repeatability.

Adhesive Strength of the tape- different brands of tape used during sample preparation can increase or decrease the test result. A lower adhesive strength of the tape will absorb energy at impact when the pendulum strikes the Ibond angle and will produce a lower reading due to the energy lost at impact. 3M brand 410 B tape is an example of a tape which complies to the TAPPI test method T 569, called  and ISO 16260.

Density of the paper- Ibond result data of high-density papers show greater variability than a low-density paper. This is due to the high fiber to fiber bonding strength producing results near the maximum measurement range of the instrument. Internal bond strength of low-density paper such as filter paper or recycled board will produce low Ibond numbers and better precision. Glassine paper which has a very smooth surface and high density will have higher bond strength values and increased test result variation. 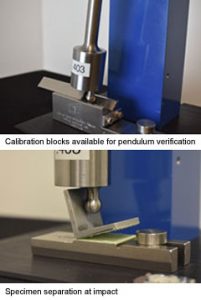 Pendulum Range in use- testing the same grade of paper using a higher or lower range pendulum will produce different test results. The data will report a higher reading when testing the same grade of paper using 15 J/m-sq pendulum vs a 10 J/m-sq pendulum. The energy produced by the pendulum in motion at impact on the test specimen influences the test result. For this reason, when comparing Ibond data using different testing instruments, make sure both instruments are using pendulums with the exact same measuring range.

Condition of the test anvils- Ibond test anvils over time will age and the test surface where tape is applied will wear and get scratched. A rough or scratched surface will have less surface area and a lower adhesive bond to the metal anvil, this will result in lower Ibond strength. It is important to visually inspect test anvils and replace when needed.

Performing an IBT-Internal Bond Test is a complicated test. There are numerous mechanical and operator variables affecting the precision of the measurement technology including in sample preparation, adhesive strength, age of the tape, instrument stiffness and physics of the pendulum design.

In addition to test instrument variables, the precision and reproducibility of measuring the energy consumed to break inter-fiber bonding strength will vary based on paper thickness, basis weight, density and type of pulp resulting in an average coefficient of variation of 12%.

Since 1994, TMI has manufactured, installed and serviced over 600 Internal Bond Strength testers and is considered the premier global leader producing Internal Bond testing instruments. In 2018, we introduced our latest model 80-20-02 which features touch screen technology and automated test setups. For more details on this new product refer to Model 80-20.