Creating the perfect beverage can coating

A 2021 exploration of our planetary plastics problem

Beverage packaging testing – how to find the recipe for success.

How Important is Accurate Density Measurements to Quality Products? 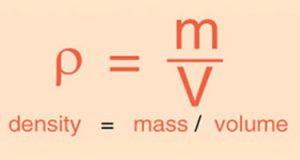 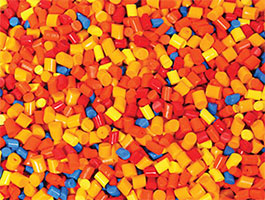 For most polymers density is a constant; polypropylene is 0.90 g/cm3, polycarbonate is 1.2 g/cm3, etc. Adding fillers such as a colorant, talc or glass will change the density; incorporating an impact modifier may lower it slightly; but the density of the base polymer does not change. Polyethylene (PE), however, can be manufactured across a range of densities that are related to the spacing between the polymer chains. The original PE that was created in the 1930s by placing ethylene gas under extremely high pressures and temperatures was what today is called low-density PE (LDPE). It was not called LDPE when it was first developed, because there was no other kind. It was simply polyethylene. It was soft, flexible, and resistant to cracking; a perfect replacement for the rubber materials that were being used at that time.

In the mid-1950s, new catalyst technologies enabled polymer chemists to control the way that the polyethylene chain grew during the polymerization process. The polymer chains in LDPE contained numerous branches of varying lengths that created substantial amounts of empty space between polymer chains. The new catalysts produced chains that were comparatively free of these side branches, resulting in a linear structure that allowed the molecules to pack more closely together. This closer packing increased the intermolecular forces between the chains, resulting in a higher density material that was noticeably stronger and much stiffer. It was also less ductile more brittle and susceptible to stress cracking, especially at low temperatures. With increasing control over the polymerization reaction, chemists were able to vary the density of PE on an essentially continuous scale from as low as 0.912 g/cm3 to as high as 0.975 g/cm3. A classification system grew up to categorize the different families according to their density. Low-density, medium-density, high-density copolymers.

As polymers made an increasing impact on various industries, engineers learned how to select materials for various applications based on the balance of strength, stiffness, and toughness that each class of polyethylene displayed. Even within a given type, there was a significant density range of approximately 0.014 g/cm3 to 0.017 g/cm3 that separated the highest and lowest density materials. Because the density of PE can be controlled and varied, it must be specified as part of the material selection process.

Our world relies on plastics. For everything from automotive parts to ketchup bottles, the density of the molded plastic is a key indicator of how well such parts perform. Key performance requirements such as flexibility, strength and crack resistance are all related to density. Consideration of such properties is important during product development, particularly density is useful for calculating the strength to weight ratio. Following manufacture processes; density can be used to confirm product quality as a measure of the consistency of the individual parts and this can also provide additional information on the performance of the manufacturing equipment itself.

Density for quality control to ascertain parts consistency as a quality control test has become a vital part of incoming material evaluation. Measuring density to an accuracy to 10-4 g/cm3 has become necessary. Density determination involves weighing the material in air and then in a liquid of known density (usually water or ethanol). Consistency of the raw materials as well as the production process itself. For example, an internal air bubble could ultimately cause a part to fail when placed under stress or a variation in the raw material will be indicated by a change in the density which may have a detrimental effect in the functioning of the part. Such occurrences can damage a manufacturer’s reputation, cause recalls and even pose a threat to consumer safety. Sampling of incoming materials is a simple and cost-effective way to monitor ongoing quality and provide assurance that parts will perform as expected.

Choosing the right tool is critical in quality control and determination of the correct density. The biggest influence and weakness of measuring density in quality control labs is inconsistent measuring techniques and procedures. A digital tool that is capable of removing the inherent mistakes will become an invaluable tool for the quality control of your incoming materials. Benjamin Franklin knew what he was talking about when he said that “time is money.” Obviously, the less attention a method requires from the operator, the better this person can focus on other tasks. To save a lab technician time, it is therefore quite useful to provide density measurement methods that can be automated as much as possible while keeping the possible sources of error and negative influences on the measurement at a minimum.

The 21-10 Automatic Densimeter DSG-1 from Toyo-Seiki is a high precision instrument that offers automated, accurate, simple operation in almost any laboratory environment. An electronic balance determines specific gravity of rubber, plastic, ceramic, and various other materials with the single push of a button. Specific gravity of the sample can be directly read on the indicator screen simply and easily. The DSG-1 will provide the company with the accuracy they require as well as the ease-of-use necessary to ensure reliable results with different operators across the various production lies. The method of calculation is shown in Figure 3. 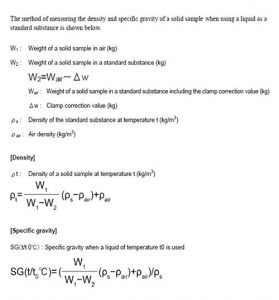 The DSG-1 measures specific gravity of a wide range of substances. In a simple operation – mount sample, push start button, dismount sample. The entire operation can be done in 20-30 seconds.

The DSG-1 has many options available that will increase its accuracy and ease of use: