How is sustainability impacting can testing equipment?

What does light weighting mean for can inspection techniques?

Working together to protect businesses

How is sustainability impacting can testing equipment? What does light weighting mean for can inspection techniques? Will innovation impact packaging inspection equipment?
Knowledgebase >

The Rockwell Hardness test is used to determine the hardness of a material by measuring the depth of penetration of an indenter on the material being tested.

What is Rockwell Hardness Testing?

The Rockwell Hardness Test is generally a non-destructive test performed on samples when it is necessary to determine how hard a material is.  Hugh M. Rockwell (1890–1957) and Stanley P. Rockwell (1886–1940) from Connecticut co-invented the first tester and a patent was granted in 1919. The Rockwell Hardness test is generally considered easier to perform compared to other methods such as Vickers or Brinell.

The Rockwell hardness test consists of indenting the test material with a diamond cone or hardened steel ball indenter. Each time a test is performed two loads are applied to the sample being tested. First, the indenter is forced into the test material under a preliminary minor load and this depth is recorded. With the minor load still applied an additional load is introduced known as the major load which increases the depth of penetration on the sample. The Major load is then removed, and the force on the sample is returned to the minor load. The increase in the depth of penetration that results from applying and removing the major load is used to calculate the Rockwell hardness value. 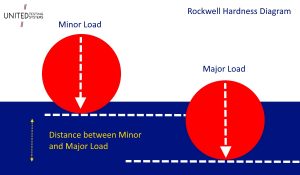 There are several different Rockwell Scales each denoted by a single letter. Each scale requires different loads or indenters, so careful consideration should be given to which scale you are working with when evaluating results.