Why does paint dry on the wall but does not harden when in the tin?

There are two basic mechanisms by which paints dry on the wall.

Many modern paints are largely water-based. As we know, water readily evaporates. However, the rate of evaporation of a liquid depends on the vapour pressure of that liquid above the surface. In a sealed tin of paint, a set vapour pressure is quickly established in the small headspace in the tin and the water in the paint does not evaporate and remains in the paint. But, when painted on the wall, the water can readily evaporate to leave a dried film of solid paint components behind – there is no build-up of water vapour pressure in a confined space as there is in the tin.

Other paints, especially those manufactured some time ago, are by contrast largely oil-based. Unlike water, the oil does not evaporate. These paints dry on the wall in a very different way, through a chemical reaction with the oxygen in the air. This causes the relatively small molecules in the oil to form much larger molecules which have a solid rather than liquid form (i.e. polymers are formed). In the sealed tin, oxygen is not available for this chemical reaction to occur, and the oil remains in its original, fluid (smaller molecule) form. 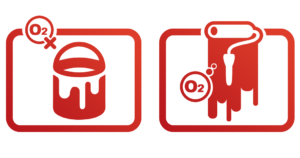 These two distinct mechanisms account for the contrasting behaviour of paints in a sealed tin and on a wall.

How does paint dry?

As the paint dries, a film is formed which adheres to the surface of the material to which it is being applied.

Emulsion paints dry by a physical process involving the evaporation of water followed by coalescence of the polymer droplets and their subsequent integration into a hard polymer matrix that acts as a binder for the pigment.

On applying gloss paints, the alkyd polymer cross-links by an oxidation reaction with oxygen in the air once the solvent has largely evaporated. This reaction is accelerated using salts of transition metals (for example, cobalt and manganese naphthenates). The transition metal ion (with variable oxidation state) catalyses cross linking of the polymer chains, producing a hard surface film to the paint.

How does gloss paint dry?

The binder or film former in gloss paint is called an alkyd resin. … When the solvent evaporates, the oxygen of the air interacts with the resin which results in the formation of cross links between the polymer molecules and produces a strong, dry film.

How long does it take for latex paint to dry?

How long does latex paint take to dry between coats? The majority of latex paints when applied at room temperature will be dry set-to-touch within one hour or less and may be recoated within four hours. Poor ventilation, low temperatures, thick films and high humidity will increase these times.

How long does it take for latex paint to cure?

A second or third coat can typically be applied within three to five hours. Because latex paint dries on the outside first, it takes at least 14 days for it to cure. If the paint is in an area with bad curing conditions, it could take up to 30 days.

How long does it take for Polycrylic to cure?

At least 3 coats are recommended. If unable to recoat within 1½ hours, wait at least 72 hours then lightly sand and recoat. Polycrylic™ dries to the touch in 30 minutes and can be handled after 1 hour. After final coat, allow 24 hours before normal use.