Meet us at BevTech Europe 2022

Measurement and Control of the Optical Properties of Paper

Gases all have their own thermal conductivity that helps you to understand how well heat moves through it.

The thermal conductivities of several common gases are listed in the table below.

The sensor uses four matched filaments that change resistance according to the thermal conductivity of the gas passing over it. The sensors and the filaments are connected in a ‘wheatstone bridge’ configuration as shown below in Figure 1.

When all four resistances are the same, the VOUT is zero and the bridge is considered balanced. When ‘zeroing’ the reference gas is passed over all of the filaments. The resistances will be the same because the filaments are matched and the bridge is balanced. When the sample gas is passed over half of the bridge, then the VOUT value correlates to the content of the sample gas in the reference.

The detector is a four element ‘katharometer’ having two elements situated in the reference gas and two elements in the sample gas shown in Figure 2 below. 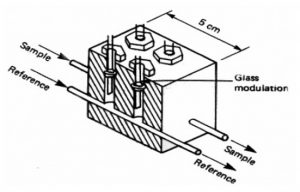 When the sample gas is introduced into the sample gas stream, the two katharometer elements in the stream will be cooled to a greater extent than the two elements in the reference gas. The bridge circuit will be unbalanced, producing a signal voltage related to the makeup of the sample gas. This relationship is non-linear. As a result, the Systech Illinois 542 programmable gas analyzer is calibrated at zero, mid-span, and high span. And the software mathematically linearizes the curve.

Download the full discussion note linked below for equations showing the relation between bridge voltage output and thermal conductivity.

Measure the gas sample content of a sample/reference mixture by comparing the thermal conductivity of the mixture with that of the reference.

Helium is the only other gas with a thermal conductivity comparable with that of hydrogen.

Other gases that may be measured using this technique are:

WARNING: once again, many sensors can’t be used to measure gas/air or gas/oxygen mixtures if they are potentially flammable.

At Industrial Physics, we help manufacturers, laboratories, and production lines to protect the integrity of their packaging, products, and materials by providing them with the highest quality of test and inspection instruments. To find out more about how we can support your needs, get in touch.