How to Test the Quality of Powder Coatings

How to Measure Paint Thickness with a Coating Thickness Gauge

Oxygen is a paramagnetic gas and is attracted into a strong magnetic field. Because this measurement is a purely physical effect, nothing is consumed and in principle the cell has an unlimited life. However, contamination of the cell by dust, dirt, corrosives or solvents can lead to deterioration. Measurement range is typically 0.05% to 100% O2.

The sensor incorporates two nitrogen-filled glass spheres mounted on a rotating suspension.  This assembly is suspended in a strong magnetic field.  The oxygen in the surrounding gas is attracted to the magnetic field, resulting in a force on the glass spheres.  The strength of the torque acting on the suspension is proportional to the oxygen content of the surrounding gases. 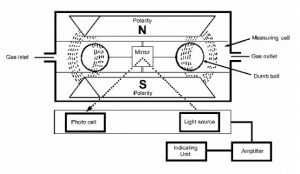 First, when oxygen is introduced to the cell, the torque acting upon the suspension assembly is balanced by a re-storing torque due to the feedback current in the coil. The feedback current is directly proportional to the volume magnetic susceptibility of the sample gas and hence, after calibration, to the partial pressure of oxygen in the sample. Therefore, the current gives an accurate measurement of the concentration of oxygen in the gas mixture.

Second, the electromagnetic feedback “stiffens” the suspension, damping it heavily and increasing its natural frequency, making the suspension resilient to shock

Factory calibration consists of calibration of the electronics to accept the input signal from the detection cell and checking that the instrument then reads correctly on air, 20.9%. The instrument is then further checked for correct reading on 100% oxygen content.

The paramagnetic o2 analyzer may be used for measurement of oxygen at any level between 0-100% in gases or gas  mixtures.

Some other gases are also paramagnetic and their presence in the gas stream can cause a false reading. The effect is relatively small in most cases. The table below shows the paramagnetic effect of background gases, at 20oC, in 100% concentration: