What is a Universal Testing Machine?

Why is tensile testing important?

Brinell Hardness Testing: How To Calculate

How are Brightness & Whiteness related?

There has always been confusion about what brightness is in the paper industry. Constant questions arise about different versions of brightness including diffuse, directional, TAPPI, GE, ISO, D65… Many previous blog posts and two articles from Technidyne Corporation do a good job of explaining these differences. However, Whiteness has come into greater prominence in recent years as an optical measurement of paper quality. This brings up new questions like, ‘which measurement provides a better representation of visual observations?’ and ‘what is the relationship between brightness and whiteness?’.

Brightness was originally defined in the 1930’s as a reflectance measurement in the blue part of the visible spectrum defined originally by TAPPI Test Method T452 to monitor the bleaching cycle. Subsequently, it has been used to characterize paper optical properties outside of just bleaching.

Whiteness indices are a compromise between colorimetry and brightness measurement. Colorimetry is a cumbersome but complete three-dimensional description of whiteness, whereas brightness is simple to understand and convey but relates only to the blue portion of the visible spectrum. Whiteness indices have the advantage of being single number quantities that are based on the entire visible spectrum, however, they do reward purple and blue shades of white. This is done to correlate with visual observations of most people.  The chart below shows how brightness and whiteness each relies on a different subset of visible spectrum data. 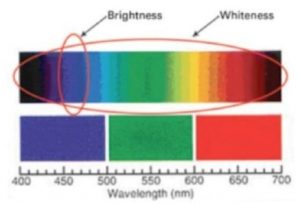 Relationship Between Brightness and Whiteness

The most basic question in determining the relationship between brightness and whiteness is first, which brightness (directional/UV Level C, diffuse/UV Level C or diffuse UV Level D65) and which whiteness calculation do you want to compare? Literally hundreds of whiteness formulas have been published or applied in different fields over the last 70 years and under a variety of conditions. Just as an example there are whiteness formulas know as Berger, Stephansen, Stensby, Taube, Ganz, Hunter, Harrison, Judd, MacAdam, Croes, Friele, Coppock and Vaeck just to name a few. It is known that whatever whiteness formula is selected that it normally includes a value (Z, Rz, R460) in the blue part of the spectrum in the calculation. However, it is not the same value used in every formula, and, in fact, it is never the brightness value. The weighting of this factor is different in each case.  So there is a relationship, however, there is no direct correlation between brightness and whiteness. A comparison of the two different indices would have to take into account variables such as geometry, UV level, illuminant/observer conditions, calibration methodology, chemical constituents in the paper and various grades of paper.